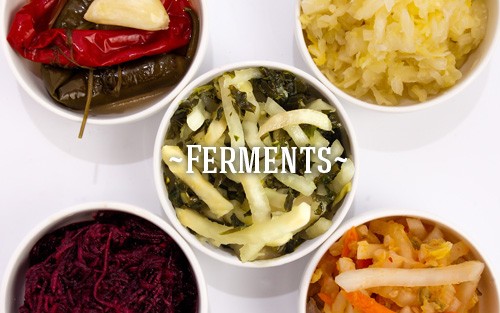 The Importance of Fermented Foods

You’ve heard me bang on time and time again about the importance of maintaining a healthy bacteria population in your gut, and how this aids in the process of digestion. This is why we fork out a fortune on expensive probiotic supplements … but there is a cheaper and incredibly simple way you can also increase the healthy flora in your system, and that is by introducing fermented foods into your diet!

Fermentation is a metabolic process in which microorganisms such as bacteria (like the lactobacillus you hear health professionals go on about), yeast or fungi convert organic compounds – usually carbohydrates such as starch and sugar – into alcohol or acids. For example, lactobacilli bacteria turn sugars and starch into lactic acid, and acetobacter bacteria turns alcohol into acetic acid (commonly known as vinegar).

So what does the process of fermentation actually do?

But most of interest to us FODMAPers ….

Some FODMAP Friendly Fermented Foods to include in your diet include:

The Lewis & Son Ferments range are all raw, unpasteurised products.  This means that all beneficial enzymes, viable micro-organisms and minerals are present. They are a Melbourne based company and have been around since 1945 (wowie!) Some of their products were actually the first in the world to be certified FODMAP Friendly! They also have a big Vegan Range (don’t be put off by the fact they’re also a Deli) and the guys who run the show are so lovely and down to earth, you just want to support them as much as possible. Here are a few of my FODMAP-friendly Vegan products in their range:

So there you have it … a quick rundown on ferment foods and why they’re important to include in your FODMAP-friendly Vegan diet. You’ve got a range of options to choose from … just goes to prove that being a FODMAP Friendly Vegan doesn’t have to = restrictive eating 😉